The SToMP (Software Teaching of Modular Physics) project was funded in the UK in 1992 to create a learning environment for some common first year physics courses. From the mid 90s, this included an assessment system that supported the delivery of the following question types:

Dick Bacon (r.bacon at surrey.ac.uk) has shared information about the project and given permission to share the documents below.

He advises that after about 6 months the project’s Open University representative, Steve Swithenby, pointed out that they really should have an assessment component, and during a six week sabbatical in Sweden, Dick created a prototype in Visual Basic handling, he believes, single and multiple choice, pairing and ordering questions. About 1994-5 the real version was produced, see details in the document below. In 2002-ish this was replaced by a QTI v1.2 system that outlived the rest of the SToMP project. Dick retains the SToMP name for his current SToMPII QTIv2 system (see http://www.stomp.ac.uk/stompii_demon.htm).

Here is a screenshot of the 1994-95 version. It shows a five question test, the questions being in the formatted text viewer on the right. The response box has a tab for each question, and the user has just got the first question wrong and has the feedback displayed. It is a self test, so results are not recorded and the student can try again as many times as wanted. 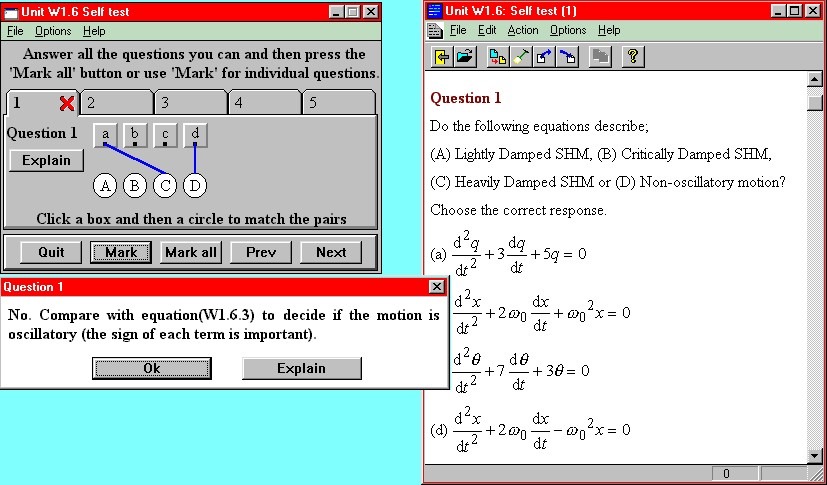 Some links on SToMP

And here are copies of the SToMP manuals with great detail on the functionality:

Thanks Dick for sharing this important 1990s example of assessment technology.