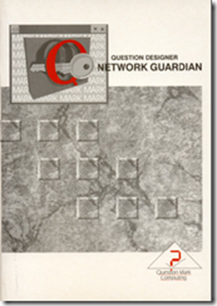 Question Mark Guardian (also called Network Guardian) was an add-on companion to Question Mark Designer for Windows which allowed you to control who has access to exams, tests, surveys and quizzes – including:

According to contemporary documentation, Question Mark Guardian helps you resolve your security problems. With Guardian you can:

Evidence of its release and availability:

Evidence of its functionality:

The first version of Network Guardian was called version 2.1. The user manual was printed in May 1995, ISBN 1 872089 13 5. The user manual has been uploaded to this site with the permission of the copyright holder.

Feel free to post any questions on Question Mark (Network) Guardian, and I will try to answer.